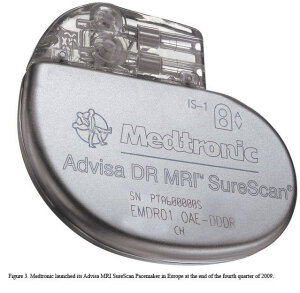 Medtronic released an
MRI-compatible pacemaker,
the Advisa, in
Europe in 2009.
The U.S. Food and Drug Administration Tuesday approved a pacemaker compatible with magnetic resonance imaging. The device is the first of its kind in the United States, and will allow patients with pacemakers to safely undergo the exam.

The device, called the Revo MRI SureScan pacing system, will begin shipments immediately, according to its developer, Medtronic Inc.

Previously, MRIs were considered unsafe for the 1.5 million American patients with electronic cardiac devices, according to the FDA. The magnetic fields produced by MRIs - as much as 30,000 times more powerful than the Earth's magnetic field - interfere with pacemakers, placing the patient at risk for unintended heart stimulation or tissue damage.

Medtronic estimates nearly 200,000 pacemaker patients opt out of MRI scans each year. However, MRIs are essential diagnostic tools, especially for older patients, since they can accurately detect strokes, cancers and a range of neurologic and orthopedic conditions. The FDA estimates that half of all patients with pacemakers will require an MRI scan in their lifetimes.

"Patients who meet the parameters for the device will be able to maintain their critical cardiac therapy while benefiting from the precise diagnostic capability of an MRI," he said in a statement.

However, the FDA did not give the Revo MRI blanket approval. The pacemaker's use is limited to certain patients under specific conditions. Cardiologists and radiologists who use the pacemaker will also require additional training.

The device will cost between $5,000 and $10,000. "The cost for Revo MRI is comparable to other pacemakers, and will be covered by Medicare," said Wendy Dougherty, a spokeswoman for the Minneapolis, Minn.-based Medtronic.

Although the device was approved, a warning letter issued by the FDA in 2009 remains in place. The letter was directed at the company's Mounds View, Minn., cardiac rhythm division regarding problems with the company's procedures for preventing and identifying potential issues with some products.

Karen Riley, a spokeswoman for the FDA, said that the device was approved despite the letter because of a "significant public health need" since many pacemaker patients will need future MRIs. "This is the only device that addresses that need," Riley said.

In a statement, Medtronic's Senior Vice President Pat Mackin said the warning letter will not affect the company's plans to begin shipments immediately. "We are continuing to work with FDA toward a final resolution to the Mounds View warning letter and are optimistic that we are making progress toward this goal," Mackin said.