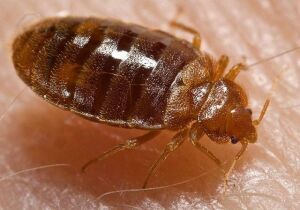 According to a series of news reports, health care centers around the country are finding unwelcome visitors under the sheets: bedbugs.

A surgical unit at the Central Maine Medical Center in Lewiston closed last week to allow exterminators to treat the area for bedbugs. The hospital moved patients out of the unit, and it said it hasn't found any more bedbugs, according to The Associated Press.

And the Blank Children's Hospital in Iowa recently treated two rooms for the bloodsuckers. While the hospital said the pests are gone right now, new ones can come in with new patients. According to one pest control expert, who treated the Iowa hospital, bedbugs are on the rise.

Orange Park Medical Center in Florida reported the problem several weeks ago, but said the issue had been resolved and it had established processes to screen for bedbugs.

George Richardson of Peninsular Pest Control said exterminators have been treating an increasing number of beds in homes throughout the area for bedbugs, according to a News4Jax article.

But Ron Harrison, director of technical services for Atlanta-based Orkin, said while bedbug infestations have grown over the last five to eight years, he hasn't noticed a surge in hospital outbreaks, although the media may suggest otherwise. He attributes the seemingly new and frequent outbreaks to media hype.

The chances of hospitals having a bedbug infestation are "relatively small," Harrison told DOTmed News. They are likely to appear in a long-term care facility where people stay for extended periods of time, thus bringing in belongings from home.

Although pesky, there is currently no evidence that suggests bedbugs carry harmful diseases, said Harrison.

"It's more psychological than disease transmission," he said of health concerns. "It's not a comfortable thing for most people."

Spotting the critters
The best way to contain bedbugs is to always remain vigilant, said Harrison. Spotting a bug early could save a hospital from a lot of headaches and bug bites.

Short of seeing a bedbug, the best way to determine if a facility or home has an unwanted visitor is by looking for fecal smears, said Harrison. Adult bedbugs, the size of an apple seed or tick, are easily seen. But after a blood meal, the bugs will defecate, leaving an ink-like smear on a mattress or linens. It's also common to find a dried up ball of fecal matter on hard surfaces such as plastic, said Harrison.
1(current)
2