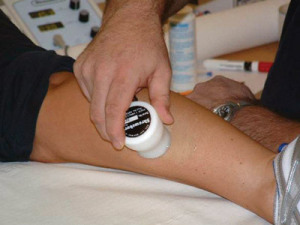 Researchers studied patients
with tibial fractures.
Ultrasound may be an effective tool for healing fractures, according to new research published Thursday in BMC Musculoskeletal Disorders.

The researchers, led by Jon Block, tested LIPUS on 51 patients and a sham device on 50 controls between January 2002 and December 2005. Patients ranged from 14 to 70 years old. The patients used the ultrasound device - a handheld control unit attached by wire to a small ultrasound emitter - on the fracture site for 20 minutes every day for 16 weeks.

The study, which was funded by ultrasound manufacturer Smith and Nephew, "should assist in establishing this non-invasive modality as a viable, effective treatment option for patients suffering these injuries," the researchers wrote.

The device, known as Exogen, is available in both the United States and the European Union.