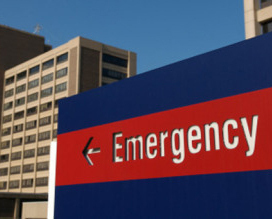 Source: iStockphoto
Advanced imaging such as CT and MRI in emergency rooms nearly tripled over the last decade, according to a study published Wednesday in the Journal of the American Medical Association.

Not only are patients being exposed to higher levels of radiation with increased use of scans like CT, the researchers did not find significant benefits to all of the patients who underwent advanced imaging scans.

The researchers from Johns Hopkins University studied emergency room data from 1998 to 2007, trying to identify whether there is an excessive use of medical imaging, which would increase health care costs and radiation exposure without yielding significant benefits to all patients. Led by Dr. Frederick Kofi Korley, the team found that of the 324,569 ER visits during the studied time period, 20 percent were injury-related.

They discovered that the use of the scans went from 6 percent of ER visits in 1998 to 17 percent in 2008, but there was no parallel increase in the diagnosis of life-threatening conditions or hospital admissions.

The prevalence of life-threatening conditions only increased from 1.7 percent in 1998 to 2.0 percent in 2007, according to the report.

"Analyzing this trend is important because approximately 70 percent of injury-related visits are by persons who are younger than 45 years, and this group is at the greatest risk for potential long-term oncological effects of ionizing radiation exposure," the researchers wrote.

The researchers point out several factors that may have contributed to the significant increase in CT, including the superiority of CT scans over X-rays in diagnosing certain conditions; routine use of whole-body scanning for patients treated in trauma centers; increased availability of CT scanners; proximity of CT scanners to patient care areas of most ERs; and a concern about malpractice lawsuits for a missed diagnosis.

In addition to CT scans being the culprit in increased radiation exposure, it's also expensive. The researchers cite numbers from the Government Accountability Office, which say annual spending on CT imaging more than doubled from 2000 to 2007, from $975 million to $2.1 billion. During that same period, spending for standard imaging - X-ray and ultrasound - increased by 65 percent.

"Further work is needed to understand the patient, hospital and physician factors responsible for this increase and to optimize the risk-benefit balance of advanced radiology use," the researchers concluded.