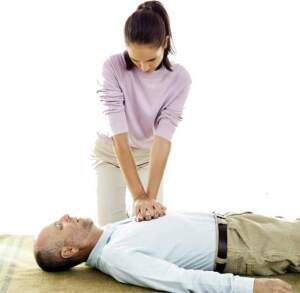 Cardiac arrest patients who received compression-only cardiopulmonary resuscitation outside of the hospital were more likely to survive to hospital discharge than those who received conventional CPR - rescue breathing and chest compressions - or no CPR at all, according to a study published in the Oct. 6 issue of the Journal of the American Medical Association.

In order to increase a sudden cardiac arrest patient's chance of survival, the state of Arizona instituted a program designed to educate bystanders to use compression-only CPR. This method of resuscitation is easier to teach, learn, remember and perform than conventional CPR, the researchers said.

"We wanted to make an intervention to improve survival, and one of the strategies was to increase the number of bystanders trying to help," said lead researcher Dr. Ben Bobrow.

Bobrow is also an associate professor of emergency medicine at the University of Arizona and the medical director for the Bureau of Emergency Medical Services and Trauma for the Arizona Department of Health Services.

Compression-only CPR, said Bobrow, has been shown to be more effective than conventional CPR.

"Anything that interrupted compressions was detrimental," he told DOTmed News, referring to previous studies.

The researchers reported that rates of survival to hospital discharge were 5.2 percent for the no bystander group, 7.8 percent for conventional CPR and 13.3 percent for compression-only CPR. They also reported that the annual rate for lay rescuers providing any type of bystander CPR increased significantly over time, from 28.2 percent in 2005 to 39.9 percent in 2009. Bobrow attributes this increase to awareness and education of compression-only CPR.

The researchers want people to take away from the findings that anyone can administer compression-only CPR to adults, and it's better than doing nothing.

"Anyone who is able to put one hand over the other, lock their elbows and push hard and fast can do this," he said. "This study will help convince communities across the country that they can do this. It will save many, many lives."