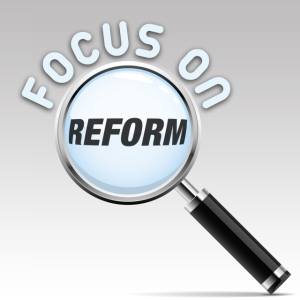 DOTmed zooms in
on key reform issues
In previous Focus on Reform reports, DOTmed News has provided briefings on the most imminent changes to the U.S. health care system. But what are the provisions remaining in the Affordable Care Act in its latter years?

Controls in spending and incentives for individuals to join wellness programs are part of what the act holds for 2014. Medicaid will be expanded to cover more people, but Medicare's growth will be monitored, and health insurers will be taxed to increase revenue. Below are more details about the changes to come in just a few years.

--An Independent Payment Advisory Board will be established to reduce the per capita rate of growth in Medicare spending. Each year, the Chief Actuary of the Centers for Medicare & Medicaid Services will determine a projected per capita growth rate. If the projected rate exceeds the target rate for the year, the Board will develop and submit a proposal containing recommendations to reduce the growth rate.

--Medicare Disproportionate Share Hospitals allotments to states will be reduced. The aggregate reductions in DSH allotments for all states will be equal to $500,000,000 for fiscal year 2014; and reduced further thereafter.

--Medicare Advantage plans must have a minimum medical loss ratio of 85 percent or face a penalty.

--The eligibility for Medicare will be expanded to include those non-elderly individuals with incomes up to 133 percent of the poverty level. States will receive 100 percent federal funding for the first few years of the expansion. Individual income will be calculated by a modified adjusted gross income standard and not include asset testing for eligibility.

--Employers will be allowed to offer employees rewards including premium discounts, cost sharing waivers, or other benefits up to 30 percent of the cost of coverage, for participating in a wellness program. The rewards may be raised to 50 percent if appropriate. Any wellness program that is the basis of rewards must be reasonably designed to promote health or prevent disease. That is, defined as a program that has a reasonable chance of improving the health of, or preventing disease in, participating individuals and is not overly burdensome; is not a subterfuge for discrimination based on a health status factor; and is not highly suspect in the method chosen to promote health or prevent disease. Individuals eligible for the program must have opportunity to qualify for the reward under the program at least once each year.
1(current)
2
3