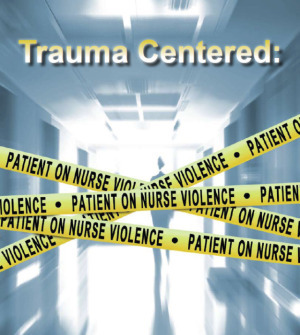 The woman came to the emergency room in an ambulance. She had overdosed on medication while driving her car. An emergency room nurse at a community hospital in Pennsylvania fed the patient, who was still under the influence of drugs, a drink referred to as charcoal. Thick and black, it's used to soak up all the toxins in the body.

It was at this point the woman decided she wanted to leave the facility. The nurse told her she wasn't able to leave; hospital policy forbids letting patients go who are still under the influence or are a threat to themselves or others. The woman, as she stood up to get out, threatened to sue the hospital.

Then things got ugly

Sherry Casey, 41, heard her colleague yell for help. She and other ER staff hurried to find the patient's face covered in the charcoal drink, struggling to get out of the stretcher.

"It just escalated from there," recalls Casey, an 11-year veteran in ER nursing.

The woman, swearing, spitting and thrashing out, managed to rip the IV out of her arm.

"There was blood everywhere," Casey says.

The woman went berserk. It took 10 ER staff members to restrain the woman, who kicked Casey and continued flailing, cursing and throwing punches. A staff member stuffed gauze in the woman's mouth to quiet her, and she was then restrained to the hospital's only stretcher that has leather straps, says Casey.

Finally, the woman was calmed with a sedative injection to her left deltoid. By the time the local police showed up, the woman was sleeping. She was still sleeping when Casey left hours later.

"That was just one isolated incident," she says.

Events like these are not uncommon nowadays. Nurses face a growing pattern of violence, whether in an ER, psychiatric ward or even just patrolling the floors.

All health care workers, nurses especially, face workplace hazards every day in a hospital setting. In fact, hospital workers suffered more than 275,000 injuries and illnesses in 2008, according to data from the Bureau of Labor Statistics (BLS). An unsettling number of the injuries resulted from patient attacks.

According to 2006 data from the BLS, health care patients were the leading source of injury among nursing, psychiatric and home health aides; they accounted for 59 percent of health care worker injuries from 1995 to 2004. These injuries generally were suffered by employees straining themselves lifting a patient or through patient assault.