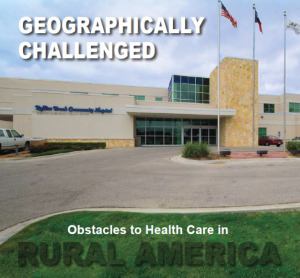 Only one person was employed at Rollins Brook Community Hospital in 1996. His job wasn't to treat patients but rather to preserve the working conditions of the hospital's building.

Although the financially irresponsible practices of the health system that managed the hospital led to its closing, the residents of the rural Texas town were determined to reintroduce white coats to the facility's halls.

"The Lampasas community decided that it was not going to allow the hospital to go underwater," says Jeff Villanueva, the hospital's administrator. "They took it upon themselves, from their own resources and from their own pocketbooks, to pay for the basic maintenance required to keep the building going."

For six months, the maintenance supervisor kept the hospital's lights and plumbing systems in order, while the community approached the Adventist Health System for help. The hospital is now a part of the health system and is also celebrating its 75th anniversary this year.

"Not too many hospitals can say that their community stepped up to the plate in their most vulnerable moment and kept the hospital alive," says Villanueva.

Rollins Brook is a 25-bed critical access hospital with a 24-hour emergency department, imaging services and a sleep disorder center. This August, the hospital plans to open a wound care center, says Villanueva.

Rural hospitals like Rollins Brook are at the heart of their communities and for many facilities, the challenges of providing quality health services are tied to geography.

The recruitment of doctors to rural areas is a major concern for many community hospitals, and Villanueva says it's his top priority. Many doctors encountered by his hospital are more interested in practicing in urban areas, with easy access to shopping centers and nightlife.

"We have a total of four family practice physicians, who have been here for quite a while. They're primarily the engines that drive the referrals that we get to Rollins Brook Hospital," he says.

The challenge of employee recruitment for Rollins Brook stems beyond just the physicians. Lampasas doesn't have a college or a university, which means there must be enough high school students who are willing to come back to the town and work in a health care setting. Villanueva says the hospital's aging staff further exacerbates this issue.

"A significant portion of our workforce is 55 and older. They are not necessarily retirement age, but they certainly are planning towards retirement sooner than I would like them to," he says.
1(current)
2
3
4
5
6
7
8