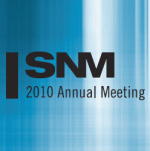 New agents and tools
to freeze motion
in PET imaging
In a collaborative effort among corporate and clinical leaders in the health care industry, a study released at the SNM conference last week shows that molecular imaging of the heart is clearer using motion freezing and a new imaging agent.

Positron emission tomography (PET) scans are often blurred due to respiratory and cardiac motion. This blurring makes it difficult to produce a clear image, and in some cases, preventing radiologists from detecting defects hidden in the image, explains Dr. Ludovic Le Meunier, a scientist for Siemens Healthcare.

"If images blur, something could disappear," he says.

The study is based on components from several different entities, including Siemens Healthcare, Cedars-Sinai Medical Center and Lantheus Medical Imaging.

The new imaging agent, flurpiridaz F 18 (F-18) injection, which is still in clinical trials, has been shown to produce high-quality images of the heart. Unlike other imaging agents, F-18 has a longer half-life of 108 minutes allowing the agent to be prepared in the morning and administered later in the day, explains Le Meunier.

In order to freeze motion disturbances caused by patient breathing and heart beats, the researchers used post-scan image processing tools called respiratory gating and motion frozen cardiac gating. These tools cut out or otherwise compensate for any motion in the image. The result? Researchers found the images were "virtually motion-free" according to the report.

"At the end [of the procedure], you have a very nice pixel resolution," says Le Meunier.

Although the combination of F-18 and motion freezing produces the highest-quality images, Le Meunier points out that even if an image used just one component, it would still be higher quality than merely using a PET scanner.

"You can use cardiac motion freezing without the new agent and still get a better image...the agent can be used without motion freezing, but it's best using them all together, which is why we took care of everything," he says.

The ultimate goal, Le Meunier says, is to get better, more accurate images.

"[The technology will let us] see defects that we don't see now," he says.