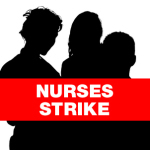 Minnesota's nurses are fighting 14 hospitals, claiming patient safety is at risk with the high patient-nurse ratio, according to the Minnesota Nurses Association. Also scheduled for Thursday, was a California nursing strike, which was at least temporarily restrained by a San Francisco judge.

"They're talking about an aggressive agenda on the national front, and that's playing out in Minnesota," she said.

The 14 hospitals were adequately staffed, calling in 2,800 replacement nurses for the 7 a.m. Thursday to 7 a.m. Friday strike period.

"We are staffed to where we wanted to be," Schriner explained.

Of the 12,000 nurses striking, 80 percent are part-time employees, Schriner said.

"Even on a daily basis we wouldn't need to replace them one to one," she said.

The union, before deciding to strike, had argued that the cost of calling in replacement nurses was excessive with some nurses charging $4,770 for a 5- or 7-day pay period. But Schriner said the cost of strike is "dwarfed" by the $250 million per year operating costs the union is demanding.

It's unclear what the next move will be for the nurses and the hospitals. Last week the union agreed to a federal mediation, but the details of that have not yet been determined.

The Minnesota Nurses Association and the National Nurses United did not return calls or e-mails for comment.