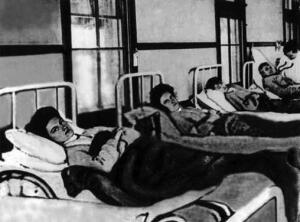 In the United States, when people dine out, their main concerns are usually what they want to eat, price, location and maybe ambiance. Millions of people get their meals at restaurants, diners, bistros and fast food chains every day.

Rarely do people concern themselves with the safety of eating at a particular establishment. It's a testament to the Board of Health that there's a very low incidence of foodborne illness among those getting a bite. However, there are exceptions. The results can be as minor as a stomach ache, but for the more severe, the damage can be particularly tough to swallow.

Possibly the most famous example of illness among the service industry occurred in the early 1900s. Although the number of victims (varying between 33 and 53 depending on the source, with three deaths) was relatively low in comparison to other instances of foodborne illness outbreaks, the vector was unique.

The outbreaks of typhoid among moderately well-off New Yorkers had one factor in common: Mary Mallon. Mallon was an Irish immigrant who was making a living as a cook. Unfortunately, instead of living her life in obscurity, she ended up living in infamy. Mary Mallon became well-known to citizens of that time and is even remembered today by the moniker "Typhoid Mary."

Mary arrived in America around 1884 at the age of 15. She found she had a knack for cooking. Being a cook was one of the better-paying professions for domestic help. It was also one of the few niche careers available to first-generation immigrants at the time. Her employers didn't realize the actual cost of hiring her.

In the summer of 1906, six of the 11 members of the Warren family contracted typhoid. Charles Henry Warren, the family patriarch, was a wealthy banker who rented a house on Oyster Bay, Long Island for a family vacation. After the outbreak, the home's owner, George Thompson, knew he would encounter difficulty renting the house again unless the cause of the typhoid outbreak was uncovered.

It was already known at that time that typhoid was introduced through contaminated food and water, but an investigation yielded no clues.

It wasn't until Thompson hired George Soper, a civil engineer with experience dealing with typhoid outbreaks, that the mystery was revealed. Soper deduced the missing piece of the puzzle was the missing cook - Mallon had moved onto other jobs before he became involved. Upon further research, Soper discovered Mary had worked for seven employers between 1900 and 1907. At least 22 individuals linked to Mallon through those jobs had come down with typhoid, including one young girl who died from the illness.
1(current)
2