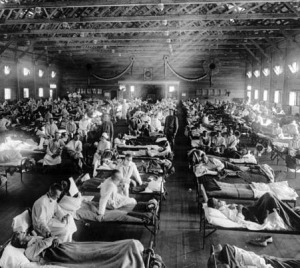 In March of 1918, the
first documented wave of
a virulent strain of
influenza swept across
the U.S.
This report originally appeared in the March 2010 issue of DOTmed Business News

With all the news hype about H1N1 over the past year, you would think that doom was imminent and that within a few months, society as we know it would be at an end. While the H1N1 flu strain has taken its toll over the past 12 months - the CDC reported in February that between 8,330 and 17,160 H1N1-related deaths occurred between April 2009 and January 16, 2010 - this is really mild compared to flu outbreaks throughout history.

In March of 1918, the first documented wave of a virulent strain of influenza swept across the U.S. Due to the flu, the average lifespan in America decreased by an estimated 10 years, and the mortality rate for those in their mid-adolescence to mid-thirties spiked to 20 times higher than in previous years. Many of the first documented cases sprung up in military camps throughout the states occurred at the tail-end of the First World War, but what would become known as the Spanish Flu would spread like wildfire across Europe, Asia, South America and the South Pacific. It would even brave the frigid Arctic and take out whole villages in Alaska. The virus is thought to have originated in China, but it didn't take its name until an outbreak in Spain, where it decimated the population, killing an estimated 8 million people just in May of 1918 alone.

Children supposedly sang the song, I had a little bird and its name was Enza. I opened the window, and in-flu-enza. The Spanish Flu is now referred to as one of the most deadly influenza pandemics ever documented, with an estimated 50 million people - that's about 3 percent of the world's population - dying from the disease. Infection rates were thought to top out around 500 million, or a third of the world's population.

The war provided ideal circumstances for the disease to spread, with populations living in close quarters under strained, substandard living conditions, and with large numbers of troops crossing borders and traveling overseas. After the second wave of the infection in the fall of 1918, new cased of the Spanish Flu fell sharply and the pandemic practically died out within a matter of months. Researchers now believe that the virus went out like a light because it mutated to a less lethal strain, which is not uncommon for pathogenic viruses. More people left alive means more people to play host.

The medical community now believes that H1N1 could be a strain of the Spanish Flu of 1918. Tissue samples from soldiers were preserved and research has been conducted to determine why the strain was so virulent and why it led to the deaths of so many relatively young and healthy victims, instead of other opportunistic strains that target the very young and the elderly. Scientists now believe that the key to the virus' death toll is something called a cytokine storm, a kind of gross overreaction of the immune system that destroys the body in a very brief amount of time. This explains why strong soldiers and healthy civilians succumbed so easily all over the globe. Current research using the Spanish Flu has sparked some amount of concern from those who fear the potential for a new virulent strain to be introduced to society.

Time will tell if H1N1 will have any greater impact in the future than it already has in these past months. Government agencies like the CDC and hospitals throughout the world have mobilized in case the strain takes a turn for the deadlier, and pharmaceutical companies have concocted vaccines in the hopes of heading-off a widespread outbreak, but it would have to be a deadly disease indeed to match the devastation of the Spanish Flu.