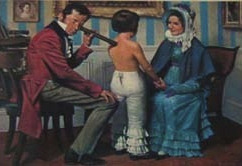 This month, we celebrate the birthday of a man who made it possible to hear people more clearly more than fifty years before the telephone was invented. Admittedly, the distance was much shorter than what a phone covers.. Unlike the telephone, it is used the majority of the time only by health care professionals (and maybe the occasional 1920's safecracker). The invention in its present incarnation may cause anxiety in some patients, because really, who hasn't had an ice cold stethoscope placed on his or her chest? Yes, one of the tools most readily associated with doctors was invented nearly two hundred years ago by Frenchman Rene Laennec.

Laennec was born in the town of Quimper, France on February 17, 1781. At the age of five, his mother died of tuberculosis and his father sent him to live with an uncle in Nantes. His uncle Dr. Guillaume Laennec was to have a major impact on the young Rene. He encouraged his nephew's medical studies and Rene began to study medicine at 14. He spent his teen years studying medicine and doing his best to avoid the anarchy of the French Revolution. Still, he did what he could by tending to those wounded in the fighting. At 17, he became very ill, with a high fever and shortness of breath and exhaustion, but he recovered enough to continue to pursue his calling.

When he was 20, his father gave him 600 francs. With that money he set off for Paris covering the 200 miles by foot - a difficult feat for the diminutive and physically weak Laennec. Once there, he enrolled as a medical student at the city's most renowned hospital.

He worked tirelessly and passionately to improve his knowledge and his craft and by 21 he began publishing scientific papers of note. In 1803, he was honored by the government with First Prize in Medicine and Sole Prize in Surgery.

In 1804 he was elected to the Society de l'Ecole de Medecine, formerly the Royal Society of Medicine and he became an editor to Journal of Medicine, Surgery, and Pharmacy. Soon after, he began his private practice. In 1810, tuberculosis claimed his brother. Laennec's own shortness of breath and chest pains were worsening as well.

After being in private practice for a few years, he was offered an academic post at a small hospital. It was there that he would invent the stethoscope.

The moment came in 1816 while he was examining a rotund woman. Because of the extra weight she was carrying, standard methods of examination were useless and due to her age and gender, he couldn't place his ear against her chest to listen to her heart. Remembering something he learned earlier in life about acoustics when he had practiced the flute, he went on a hunch and rolled a tube out of a stack of papers, placing one end to the woman's chest. To his surprise, he was able to clearly hear her heart.
He went on to publish a treatise which elucidated the results of his experiments with the new tool. The publication was often sold with an instrument crafted out of wood. Unlike today's stethoscopes, it was only placed in one ear.

He gained prestige and was elected sole professor of medicine and royal lecturer at the University of France, he also was elected a full member of the Academy of Medicine and was made a Knight of the Legion of Honor. However, the success was too brief. On April 20, 1826 he was diagnosed with the same disease that had claimed his mother and sibling. His nephew made the diagnosis with the help of the instrument Laennec had invented.

During his last days Laennec made an adjustment to his will, bequeathing his stethoscope, which he called, "the best part of my legacy," to his nephew.