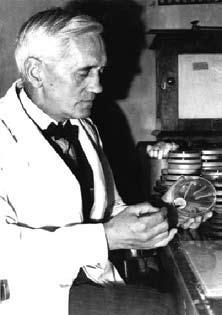 The great inventor Thomas Edison was famously quoted as saying, "Genius is 1% inspiration and 99% perspiration." As was typically the case, he was probably onto something, but he forgot one part of that equation. It's apparent if you are a regular reader of "Health Care Chronicles," whether it's the discovery of X-rays, anesthesia, or in this case, a drug that has saved thousands of lives, genius is a mix of inspiration, perspiration and having the good fortune to be in the right place at the right time.

Based on biographical information, there's no doubt Alexander Fleming definitely had genius. Fleming was skilled in most things he focused his attention on. As a young man, he excelled in academics as well as sports, being a respected marksman, water polo player and golfer. Perhaps the only things he didn't excel at were being very free and open with acquaintances - even close friends never felt they truly knew him - and keeping a tidy lab. Still, this may have served to the benefit of mankind as it meant Fleming focused on his scientific work and that work in turn, led to one of the most important drug discoveries ever.

In September of 1928, in Fleming's untidy lab, a petri dish containing staphylococcus bacteria also became host to some opportunistic mold. Fleming noticed the staph colonies which had been nearest the growing mold were no longer there. Acting quickly, he cultivated the mold and introduced it into a new petri dish with fresh bacteria. Within days, he could see the mold was killing different varieties of bacteria within the dish. Taking his studies further, he used a sterile solution to dilute the mold six hundred times and tested the solution. To his surprise, the liquid still worked to kill bacteria.

Fleming brought his findings to the Medical Research Club where they were ignored by his colleagues. Some may have been jealous that Fleming managed to act on an opportunity that they too had - but they hadn't recognized it and had simply thrown-out petri dishes when they were infiltrated by mold.

Still, Fleming realized his findings could serve as a great boon to the world, so he persisted and went on to publish a paper in the British Journal of Experimental Pathology where he wrote about the Penicillium mold.

Again, his work was ignored, but Fleming pressed on. He presented more findings in 1936 at the Second International Congress of Microbiology. However, by this time, sulfa drugs were in fashion and again, little attention was paid to Fleming's incredible discovery. In 1939, at the Third International Congress of Microbiology, Fleming learned of some American researchers attempting to further his work with penicillin. But, war was soon to breakout between Germany and England and Fleming cut his trip to the States short and headed back to England with his wife.

Fleming wasn't the only one travelling due to the war - Ernst Chain was a young Chemist who had fled Germany just after the Nazis took control. He settled at Oxford, and with the help of Australian pathologist Howard Florey, succeeded in creating a highly concentrated and pure form of penicillin. On May 25, 1940, the two injected the solution into four mice which had been infected with streptococci, leaving four others without treatment. The following morning, the injected mice were fine, while the untreated mice were dead. They went on to test their solution on humans who were dying of infection and received further promising results.

A paper was published by the duo entitled, "Further Observations on Penicillin." Through this paper, Fleming learned of the research, and realizing his work had finally been redeemed said, "You have made something of my substance."

In truth, his statement could hold multiple meanings.