by John R. Fischer, Senior Reporter
It has been one year since the MedAustron Ion Therapy Center in Austria conducted its first bout of carbon ion therapy on a cancer patient. The treatment was administered to a patient with an adenoid cystic carcinoma of the left ear and made MedAustron the sixth center in the world to offer the highly advanced form of radiotherapy.

Last year, Mayo Clinic announced its intention to build the first carbon ion treatment facility in the U.S. — but what is carbon ion therapy and how do the results compare to those of conventional radiotherapy and the advanced form of it, proton therapy? HCB News sat down with Dr. Eugen Hug, a professor of radiation oncology and medical director and co-managing director of the MedAustron Ion Therapy Center, to discuss the advantages that carbon ion therapy brings to cancer care.

Carbon ion therapy versus proton therapy
Fewer than three proton therapy centers existed 20 years ago in the U.S. Today, there are more than 30, and more under construction. The drive behind this growing trend is the physical advantage proton therapy offers cancer patients compared to conventional radiation, in its ability to precisely target tumors and spare normal, surrounding healthy tissue, thereby sparing patients long-term side effects. This allows for dose to be increased to higher levels for very aggressive tumors.

Carbon ion therapy carries the same advantage, plus another that enables it to inflict more biologic damage within the tumors, according to Hug. “These heavy charged particles create more catastrophic events within the cell or DNA. In a nutshell, it means that carbon ions are as precise as protons but they have an added biologic advantage of being more effective in tumors.”

Such an ability comes in handy when faced with tumors that are radiation resistant and require higher doses to destroy them. They include melanomas, large tumors that cannot be resected in the pelvis, sarcomas, large and unresectable head and neck tumors, and tumors in the skull base.

Another group of patients that are expected to benefit greatly from carbon ion therapy are those who have undergone full courses of conventional radiation with little to no success. “That’s where we believe we truly add something and have a clinical significant benefit for the patient and for their chances of long-term tumor control or even a cure that they cannot have otherwise,” said Hug.

Where the U.S. stands
Around 270-280,000 patients are treated with either proton or carbon ion therapy. Of this, 15% receive carbon ion therapy and are treated at facilities in Europe and Asia. The U.S. currently has no carbon ion therapy facilities, which Hug primarily attributes to it pulling out from research around carbon ions and heavy ions in the mid-1990s. “Now the U.S. is trying to catch up desperately. The NIH and NCI have started supporting research again but there has been basically 20 years lost in this research.”

He also notes that insurance companies are hesitant to cover patients in need of traveling overseas for this treatment. “There is no insurance in the U.S. that will allow patients to be referred outside the country for the most optimal treatment. No one is talking about big numbers here. We’re only talking about doing the right thing for some selected patients. I’m really saddened that the U.S. healthcare system is set up to have very little flexibility to do the right thing for the individual patient.” 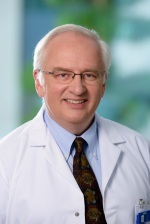 Dr. Eugen Hug
Despite these challenges, Hug believes carbon ion therapy will grow in the same way proton therapy did. This includes not just in the number of centers available but drops in both the size of facilities and pricing for treatment.

“Once we are able to take the pricing out of the equation then I think there is little doubt that carbon ion and proton therapies are the most effective treatments out there. When you do carbon ion therapy safely, you can truly do it with minimal side effects. A more widespread use requires more clinical trials with collaboration of more of the carbon ion centers to basically cement that evidence. Will carbon ions have an added clinical advantage for these very difficult to treat tumors? I think for some of those, we can already now confirm, yes, it does already have a significant advantage.”