Are radiologists going the way of the
dodo bird? Of course not...
Yes, yes they are

By the HCB News editorial team

It was an RSNA unlike any other. For the first time, radiologists and imaging stakeholders at McCormick Place witnessed an industry beginning to capitalize in earnest on concepts that — for so many years — seemed to merely describe lofty and unobtainable goals.

Yes, artificial intelligence was everywhere you looked, but AI is just one part of the emerging radiology toolkit — a kit that is being reinvented right alongside the job description of radiologists themselves.

Here, in no particular order, are the 10 biggest RSNA takeaways, according to the five HealthCare Business News reporters who were there:

1) 3-D printing braces for the mainstream

There is an array of potential applications for 3-D printing in the health care industry, but investing in the necessary technology and materials has historically been costly enough to keep this technology reserved for academic facilities or on the fringes. Through partnerships with Stratasys and 3D systems, two global leaders in 3-D printing, Philips is poised to bring down some of those expenses.

Using Philips' IntelliSpace Portal 10, providers can now create 3-D models of patient anatomy, thanks to these new partnerships. In the case of Stratasys, the models are generated in a Stratasys Direct Manufacturing facility and sent to the hospital within two days.

“It’s bringing 3-D printing to a lot of institutions that don’t have it on site,” Michael Gaisford, director of marketing for medical solutions at Stratasys, told HCB News at the meeting. 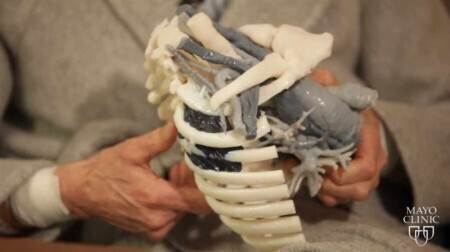 “By incorporating 3-D technology into syngo.via, we jointly support the entire workflow from patient diagnosis to therapy planning,” said Valentin Ziebandt, head of marketing at the Syngo business line at Siemens Healthineers. “This is a cost-effective way to increase the clinical capabilities of syngo.via and an important step toward achieving personalized care and precision medicine.”

One barrier to adoption is that there’s no FDA reimbursement for 3-D printing. Materialise has partnered with RSNA as a member of the 3-D Printing Special Interest Group.


2) The year of the AI partnership

It seemed like every other announcement at RSNA this year was a partnership related to AI: GE Healthcare announced a partnership with NVIDIA to bring NVIDIA’s AI solutions to GE’s imaging devices, Nuance and NVIDIA teamed up for the Nuance AI Marketplace for Diagnostic Imaging and Philips came together with Nuance to implement AI-based tools and help radiologists with interpretation and reporting.

And after those in the industry expressed worry that Google and Amazon would take over health care, companies seem to be employing an "if you can't beat 'em, join 'em" approach, especially with Google, which had a booth at RSNA for the first time.

Representatives from several companies spoke at an educational session about their use of Google Cloud to share images and analyze data.

Amidst the hype surrounding AI at the show, there was some talk about physician payment reform, and at least one hospital executive asked an important question: How are facilities going to pay for this when the payment landscape is so uncertain?

“When you speak to my peers and really survey them and say, ‘How many of you in 2018 are going to be going out and writing big checks for AI?’ not a lot of them are raising their hands,” said Dr. Rasu Shrestha, chief innovation offer at University of Pittsburgh Medical Center. “There’s a lot of interest to play around with it and tinker with it and see what it’s all about. How do you pay for it is a really important question.”

Radiology departments are all too accustomed to being strapped for cash, so even if these new technologies will usher in a better workflow and improved patient outcomes, is it realistic to ask them to make that initial investment? As you may expect, OEMs have a fairly convincing answer to that question, (keep reading).

For imaging manufacturers, partnerships are taking the place of conventional sales. Almost every exhibitor at RSNA with a giant booth made similar statements about the importance of committing to customers along the workflow continuum as opposed to thinking of them as customers on a transactional level.


"For us it's about the collaboration we have with our customers," said David Pacitti, president of Siemens Healthcare North America. "You go to every booth and you'll hear companies talk about the bells and whistles they have, but we really think what sets us apart is that we not only have great technology but we're collaborating with our customers in a more meaningful way with a focus on improving outcomes and reducing overall costs."

The trend toward service-minded relationships is logical in light of the budget constraints that facilities are under and may align nicely with the push for smarter, software-based solutions.

"Why should a hospital have to fork over so much money for something that they don't get the best use out of?" asked Philips CEO, Frans van Houten in an exclusive HCB News interview. "Redesigning workflow, first time right, less waste... that's what we're trying to bring to the market."

A technology that experts think will complement 3-D printing nicely is virtual (or augmented) reality. Virtual reality software can plan the optimal cut planes and segmentations and those results can be transferred electronically for 3-D printing.

One such software platform is EchoPixel’s True 3D, which uses medical image datasets to generate 3-D visuals of patient anatomy that can be seen using special glasses. Four cameras track the user’s head movements and they can use a stylus to move and interact with the visuals in real time. 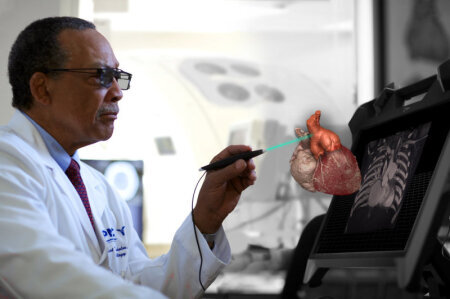 
“I think we’ve all had this experience where we know in our mind what [the anatomy] looks like, but you can tell that it’s not really clicking with the surgeon,” Dr. Jesse L. Courtier, pediatric radiologists at UCSF Benioff Children’s Hospital, told an audience at RSNA. “All of the information we have in a CT is hidden beneath the surface of a real, solid organ, so this can be challenging for them.”

With all the congressional animosity around the Affordable Care Act, don’t be tempted to think that the merit-based incentive payment system (MIPS) for physicians is going away. The legislation, which passed with bipartisan support in 2015 as part of the Medicare Access and CHIP Reauthorization Act (MACRA) is still viewed by Congress as part of a vital strategy in controlling health care costs.

President Trump has not given any indication that he disagrees with that assessment. However, a three-member RSNA panel – including two radiologists – said it is possible that some elements of the program may be slow-walked and shifted to the private sector for administration.

The panel was in agreement that participation in accountable care organizations is a key MACRA/MIPS initiative that radiologists must embrace – and even lead. ACOs qualify as a payment model that remedies the patient-facing dilemma particular to imaging. 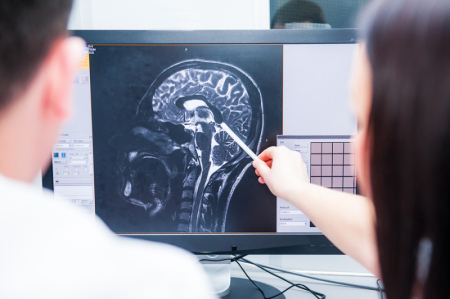 The physicians presented evidence that the value of radiologists is not in sacrificing on expensive CT and MR scans. Instead, radiologists can make an impact by supporting primary care physicians with timely consults (including on Friday afternoons, for example) to keep patients out of the ED and the hospital.

One unfortunate side effect of radiology's evolution is that it can create a rift between innovators and the people whose jobs those innovations impact. Generally speaking, companies exhibiting at RSNA 2017, particularly those engaging in machine learning and artificial intelligence, were most comfortable describing how much efficiency their software can bring to health care by automating certain processes and eliminating human error and other inconsistencies.

Ask most of them what all this will mean for the radiologists who will be having tasks taken from them and you will hear an answer like this: These tools will not replace radiologists, they will only serve to support their work and perhaps free them up to do other things.

Clearly, only the most fatalistic radiologist can realistically imagine being displaced by a robot within the next decade or so, but if a radiologist's main job is to interpret images then it's hard to see how deep learning algorithms won't eventually develop better "eyes" than any human.

The industry may not arrive there for a long time but it will likely be an awkward road heading in that direction.

8) From reading images to managing information

C'mon, will the robots really take over? Of course not! Let's try and stay grounded here folks. Talk that AI will make its way into every facet of imaging and will somehow “replace” radiologists is overblown. Instead, AI will serve radiologists. In the opening RSNA session, three radiologists with a bent toward futurism counseled a capacity crowd of over 4,000 to reinvent themselves through AI technology, (aka: play the hand they've been dealt). 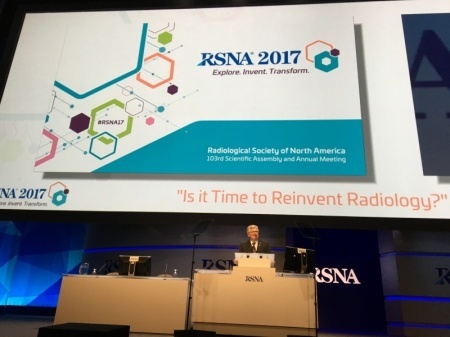 “[Radiologists] have to embrace disruption or be disrupted,” cautioned RSNA president Dr. Richard L. Ehman. “We must guide the process rather than having it imposed upon us.”


Dr. Roderic Pettigrew, founding director of the National Institute of Biomedical Imaging and Bioengineering at the NIH, and chair of a new Texas A&M program to integrate engineering into medicine, offered several examples of radiologists evolving in their role as biomedical data science experts.

“Modern imaging is information science and will improve the value proposition of imaging,” said Pettigrew. “Tomorrow‘s radiologist will leverage AI.”

Dr. Elias Zerhouni, a radiologist, and biomedical engineer, former Director of the National Institutes of Health and now president of global research and development at Sanofi, position AI as the solution to one of the biggest threats to imaging – variation. Future value, he maintained, will be from radiologists who have common, cloud-based reference data correlated at the molecular, cellular and tissue levels.

In short, radiologists will be fine — provided they can change with the times.

Decreasing exposure to unnecessary radiation is a challenge radiologists and imaging equipment manufacturers struggle with year round, so although it isn't a new concept it was a topic getting a lot of traction at RSNA. Producing solutions to keep dosage to a minimum, to better monitor its administration and — most importantly — reducing the need for unnecessary repeat imaging exams.

For example, Konica Minolta showcased its new Realism system for processing bone and soft tissue data of images separately before piecing them back together. It enables increased sharpness and contrast to reveal subtle aspects, thereby allowing physicians to make a more complete diagnosis and possibly avoid taking another image. “If we can avoid another X-ray, the patient’s happier due to fewer exposures and shorter exams,” Guillermo Sander, senior marketing manager – Americas at Konica Minolta Healthcare Americas, told HCB News.


With the number of exams and the rate of recalls reduced, patients are less likely to experience unnecessary exposure to radiation while also getting back out of the hospital faster and generating fewer expenses for the health care system.

Social media, online reviews and the unrivaled retail experience of shopping on Amazon are all factors forcing radiologists to think of patients as consumers.

“Being consumer-centric and embracing patients as consumers means that you’re thinking about your patient before, during, and after their care experience,” said Matt Henry, a health care expert with management consultant firm Point B, at an RSNA educational gathering dedicated to this subject.

This shift in how physicians think about their patients is echoed by the way radiologists are being asked to step out from behind their workstations and engage more meaningfully with the people whose images they are evaluating.