by Lisa Chamoff, Contributing Reporter
While the mobile C-arm market has seen a small but continuous demand for image intensifiers, flat-panel detectors, specifically with CMOS technology as an alternative to amorphous silicon detectors, are driving new releases. GE Healthcare’s OEC Medical Systems, one of the last manufacturers to solely offer the older technology, last year released its first C-arm with a flat-panel detector, showing that times are definitely changing. Here’s a guide to what’s new in the space.

GEMSS North America
GEMSS North America is releasing two new C-arm models this year. The first, coming out in the second quarter of 2017, is a 12-inch version of the company’s Spinel 3G, a nine-inch image intensifier. Both units run on the new CX View 3.0 software, which came out in the middle of last year. The company is also hoping to get FDA clearance for the 12HD, its flat-panel detector. The 12HD will have a 15.3-inch flat-panel detector, a larger arc and an arm-mounted control panel that swivels from side to side.

The larger field of view will be beneficial for vascular labs and orthopedic and urology practices, says Gary Kohler, vice president of sales and marketing for GEMSS North America. “That’s really the high-end flagship,” Kohler says. “We felt that there’s still a good market for image intensifiers without a doubt, but there is more need that we have noticed for a larger field of view. That’s why we’re adding the 12-inch and flat-panel, because that’s where things are headed.” All of its systems are sold through a network of 74 independent dealers covering all 50 states and Puerto Rico. 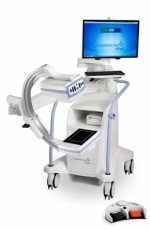 Hologic
In March, Hologic debuted an update to its InSight software that creates a low-dose mode, which gives a 50 percent lower dose than the current system, says Laura DiGangi, the company’s associate product director of global marketing. The low-dose mode decreases the frame rates to 15 frames per second with clinically equivalent imaging, according to DiGangi.

“By definition, mini C-arms are low dose,” DiGangi says. “As vendors start applying dose reduction technology, the conversations do come up more often.” The software, InSight v.6.1, is available for new systems, with an upgrade available for current customers. The company offers two C-arm models, the InSight 2, an image intensifier, and the InSight FD, with a CMOS flat-panel detector, initially released in 2012. “The focus is on image quality and creating a less intrusive system,” DiGangi says. “They’re being operated more by orthopedic surgeons and their team, versus radiology staff, and they’re looking for us to create ways to use it independently. They want more control and an easier-to-use system, so it can be used by their staff without a ton of additional training.”

Genoray
Genoray released the third generation of its main C-arm, the ZEN-7000, as a pre-order in December. The company made several image-related improvements, which make the system faster and more customizable, says Jae Perez-Kim, C-arm sales specialist and Genoray manufacturer’s representative with Complete Medical Services. One big change is the addition of a 2-terabyte, archive-dedicated hard drive that is separate from the operating system. This is ideal for facilities that use their EMR system only, without a dedicated picture archive system, such as a PACS system.

“If you don’t have a PACS system, this is a good alternative,” Perez-Kim says. “You can store your images and view them years later.” The new version of the ZEN-7000 also has a remote diagnostic system. “Typically, when the machine goes down, you have to send someone out to open it and test the board,” Perez-Kim says. “This reduces downtime.” The company positions itself as an affordable digital alternative. “Instead of paying for the name, you’re able to get a state-of-the-art, fully digital system with the same features and power for a fraction of the cost,” says Dave Orlando, vice president of the C-arm division at Complete Medical Services.

OEC Medical Systems
In September, OEC Medical Systems, a wholly-owned subsidiary of GE Healthcare, received clearance to sell its OEC Elite CFD, with a CMOS flat-panel detector, in Europe, Japan, Australia and New Zealand. The OEC Elite CFD is the company’s first full-size, flat-panel C-arm. Dan Strauch, chief marketing officer for GE Healthcare, says the company was waiting until the technology was perfected before stepping into the flat-panel arena.

Company officials felt that flat-panel detectors based on amorphous silicon were not superior to image intensifiers for the mobile imaging environment. “We stayed with image intensifier technology longer than others,” Strauch says. “People were very satisfied and it met all of their needs. We needed a compelling reason to make that change. We believe with the CMOS technology, the flat-panel technology will meet the image quality expectations of the user, particularly in difficult-to-image situations.”

In August, the company introduced the OEC Elite MiniView, also with a CMOS flat-panel detector. The mini C-arm is meant for use in hand and foot surgeries. Because it has a low dose, the Elite Mini-View can be used in an office environment, as the dose level may not require a shielded room, Strauch says. Improvements include one lock button, instead of several different locks, when a physician places a patient’s hand or foot directly on the detector. “Sometimes it’s just thinking through the challenges with our customers,” Strauch says.

OrthoScan
The company is promoting the second edition of its OrthoScan FD Pulse, launched in early 2015. It’s the first and only mini C-arm with pulse fluoroscopy, says Travis Prikryl, vice president of surgical sales for OrthoScan, with the option of 30, 15 and 7 ½ pulses per second. Other features include a 24-inch monitor and surgical LED lights under the tube-head. Instead of adjusting the room lighting, clinicians can use the LED lights, reducing the shadow effect of the tubehead, Prikryl says.

“They’re looking to lower the radiation on the patients and staff on a daily basis.” OrthoScan’s FD-OR mini C-arm, also with a flat-panel detector, was released in 2012. “The key differences in the two models are a smaller detector and continuous fluoroscopy for the FD-OR versus pulsed fluoroscopy, and pricing for the FD Pulse, which is marketed to larger facilities. The company no longer manufactures new image intensifiers. “Eighty to 90 percent of sales are driven to the higher-end product,” Prikryl says.

Philips Healthcare
While Philips Healthcare has not released a new mobile C-arm in the last year, it offers three products in the space. The company’s Veradius Unity C-arm provides the ability to store previous positions and comes with a tablet-like user interface that allows users to draw on the touch-screen with a finger or stylus. Philips’ BV Pulsera mobile C arm is an interventional radiology tool that can be used for a range of procedures, including cardiac interventions. The BV Vectra is aimed at orthopedic surgical procedures, including trauma and pain management. The company says the C-arm, with its depth and angulation reach, is easy to maneuver and to use with both small and large patients.

Siemens Healthineers
In March 2016, Siemens Healthineers received FDA clearance for its Cios Fusion, Cios Connect and Cios Select mobile Carm systems. They are lower-priced alternatives to the company’s ultra-premium Cios Alpha mobile C-arm, Siemens’ first flat-panel detector C-arm, which was cleared by the FDA in 2014. The Fusion, like the Alpha, has flat-panel detectors, as well as a touch-screen system.

“With a tableside remote, the surgeon has complete control of the C-arm in a sterile field,” says Lisa Reid, product manager for mobile C-arms at Siemens Healthineers. The Cios Connect and Select are image intensifier systems, with a redesigned user interface that has some high-end functions, Reid says. The Connect includes extra features, such as vascular options and wireless transfer of images, making it an ideal fit for general surgery, orthopedics and some vascular procedures, while the Select works for smaller environments, such as pain management clinics.

Whale Imaging
In January, Whale Imaging received FDA clearance for its G-Arm B6 Duo. The improvements over the previous model, the GXi-2, which was introduced in 2015, include compatibility with the Jackson spine table and 45-degree axial tilt, or head-to-toe movement, says Philip Posa, vice president of sales for Whale Imaging. The major difference between the company’s G-arm and a conventional C-arm is that a C-arm moves in one direction. The company’s technology allows for both the AP and lateral images to be captured at once. This has the potential to reduce dose and procedure time and minimize the risk of infection, Posa says.

“In order to get an AP and lateral view, you have to move the C-arm,” Posa says. “You’re not moving a G-arm from AP to lateral and back and forth and disrupting [the] sterile field.” The system offers panoramic view and stitching of the spine, allowing surgeons to count vertebrae, Posa says. “A surgeon wants to make sure they’re working on the right spot,” Posa says. “They’re always counting. This allows for easy counting to make sure you’re in the right area. In a very scoliotic spine, it allows for better understanding of the procedure.” The company debuted the G-Arm B6 Duo at the American Society of Spine Radiology (ASSR) meeting in February. 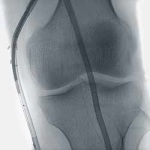 A CI stent implantation
at the knee, acquired
with Ziehm Vision FD.

Ziehm Imaging
At last year’s RSNA, Ziehm Imaging presented its Ziehm Solo FD and the Ziehm Vision RFD, both mobile C-arms with CMOS flat-panel detectors, what the company says are the first full-size C-arms equipped with the CMOS technology. The Ziehm Solo FD provides optimal soft tissue and bone contrast especially in orthopedic, trauma and pain management procedures, according to the company. The Ziehm Vision RFD, which comes with a 25-kilowatt generator for vascular procedures, has been commercially available with CMOS technology since last month.

To broaden the CMOS product portfolio, Ziehm introduced a new version of its Ziehm Vision FD, which now features the new detector technology. The company also debuted its Ziehm NaviPort 3D interface for image-guided navigation, which the company says improves reliability and precision during surgical procedures, and the Ziehm Vision RFD Hybrid Edition, which the company says is the first fully motorized mobile C-arm, which can be used as an alternative to fixed systems for cardiovascular procedures. “I am convinced that our latest flat-panel detector generation further strengthens Ziehm Imaging’s technological leadership by combining outstanding image quality and efficient workflow,” says Klaus Hörndler, chief executive officer of Ziehm Imaging. “Overall, our CMOS flat-panel detector is an excellent package, offering more possibilities and benefits for the clinician while keeping dose levels minimized.”